Winning at a distance in a bookmaker's office is quite difficult in itself. To do this, you need to develop a good strategy for the game, and then constantly fight with yourself, your emotions and passion, so as not to commit unnecessary, rash actions. But even that is not enough, because this is where bookmakers come in with their own limitations.

Why do bookmakers restrict players?

They can be partially understood, because bookmaking is a business designed to make money for its owners. No one wants to operate at a loss, and everyone strives to optimize their profits.

If a player finds a vulnerability in the line of the bookmaker's office and over and over again takes substantial chunks of profit from the bookmaker, then something needs to be done about it. Players are not angels either: someone is trying to use fraudulent schemes, someone is choosing bonuses through hundreds of accounts, someone is playing postlegals, and so on.

Absolutely all bookmakers treat fraudsters badly and, in general, it is difficult to disagree with the fact that such players are limited quite rightly. But many bookmakers, unfortunately, go even further, and begin to limit all players who just play well and win.

In this regard, you need to know one thing:

One of the most powerful and effective ways bookmakers fight winning gamblers is to cut the account. Next, let's figure out what it is and what to do about it.

What is bill cutting?

Cutting the account is a limitation of the amounts of the maximum bets on the outcomes. In general, any bookmaker's office initially has bet limits. It's just that in some bookmakers they are higher, in others they are lower. Also, the limits directly depend on the popularity of the sport, the level of the match, as well as the depth of the chosen outcome in the list. 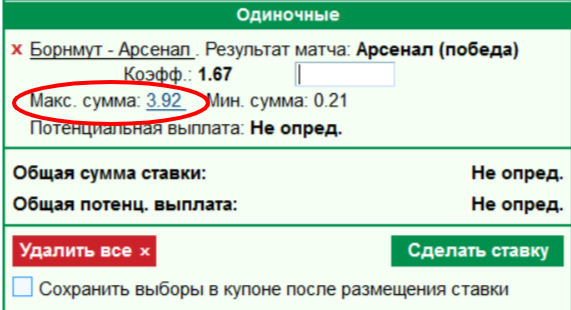 The largest amount of money can be placed in the TOP football championships on the main line of outcomes (wins, handicaps, totals, double outcomes). In large offices, the limits on these markets can go up to several million rubles per bet. At the same time, for a deep painting of beach volleyball in the same office, they will not accept even 5000 rubles for the outcome.

But the bookmaker has the right, according to its internal rules, to limit these limits to any player on an individual basis. And here there are two options:

The second case is, in fact, a kind of account blocking. The bookmaker, as it were, hints (but what is it hinting - directly says!) To the player that he is no longer welcome here, and he will not be allowed to win in this bookmaker.

There are other similar restrictions, for example, individual cutting of the coefficients, when on a particular account, the quotes are noticeably lower than those of other players. Or blocking certain markets in which the player performed well. What to do in such a situation?

The main way is to play in normal offices. By the way, you will not find such among Russian legal bookmakers. Absolutely all legal professionals working today will cut your account if you win. It's just that some will do it earlier, and others later. But cutting will not be avoided.

Fonbet, Marafonbet and Parimatch are among the most loyal offices in Russia in this regard. They value their reputation and at the same time have a high enough turnover to allow profitable players to take out a certain amount of money.

With the right approach, you can play up to 100-200 thousand rubles plus from one account. The rest of the offices will cut the account much faster - after 20-50 thousand of your profit. And very small bookmakers like “Tennis”, “Zenith” or “Mostbet” can do it for a couple of bets on smallmarkets.

We do not idealize offshore bookmakers, the vast majority of them behave in the same way. They will also cut your account if you win 90% + of the time. But there are two important nuances:

And also, in the offshore segment there are betting brokers and betting exchanges illegal in the Russian Federation - Betfair, Matchbook, Betdaq and others. They are also interested in the greatest possible turnover of their players' bets, because they have a direct commission on each of their winnings.

There are also ways to extend the life of your account. This is, for example, the so-called "warm-up". Its essence is to drain a certain amount with frankly popan bets - on express trains, systems, pop matches, huge odds, and so on before starting full-fledged work on the account. If you do this for at least 3-5 days, then there is a good chance that the bookmaker will mark you as "popana" and forget about your existence for a long time.

It is also useful in the process of work to dilute your professional strategy bets with openly ludomaniac types of bets. Yes, they will eat up part of the profit, but the account will live longer and, in the end, it will pay off.

When the bill is already cut

You can't do much here. Almost every bookmaker has the right to limit the limits to any player at his discretion in the rules. Complaining here is useless even when playing in legal bookmakers. The official authorities in the Russian Federation will take the side of the bookmaker, because the latter has internal rules, and you agreed with them.

The only way out of this situation is to create a new account. As long as there are adequate offices in which you have not played yet, you can create accounts in them. When they run out, you will have to re-register in the old bookmakers. Yes, this is directly prohibited by the rules of all bookmakers, but what else is there for the players to do?

To re-register, you need to create a new identity for yourself. This requires not only another SIM card and email address, but also a full set of identity documents. At least - a scan of the passport and a bank card for the name corresponding to the passport. But in the course of the game, additional documents may also be required - bank statements, utility bills, TIN, SNILS, international passport, and so on, depending on the fantasy of the checking service of the BC.

In addition, it is highly recommended to change the device from which you will log into your account and change your IP address. This will help the so-called virtual machines - emulators that imitate a completely different operating system, different hardware and Internet data. With some bookmakers, it will not hurt to change the manner of betting and behavior on the bookmaker's website - now you can sleep on this too.

Recently, more and more bookmakers have resorted to photo-video verification of their players. That is, they request a photo of the document against the background of the face, or even call via video link with tricky questions. This also needs to be provided, so your drop (the person for whom you are registering a new account) should be very much within your reach.

It is ideal to use the data of relatives or close friends for re-registration in the BC. But there are other options as well. If you need accounts on an industrial scale, and close people have already run out, then you can resort to buying ready-made accounts in the bookmaker office or google the topic “drops for registration at bookmakers” on the Internet.

Cutting the account is an almost inevitable fate of every winning player. In Russian offices, the probability of cutting the account tends to 100%, the only question is how quickly it will happen. Cutting is an irreversible phenomenon in 99% of cases, if you are cut, then you can say goodbye to this account.

The only way to avoid cuts in a recreational bookmaker is to play more. But these are not our methods.

You can avoid cutting your account by playing in the right bookmaker's offices. There are also ways to extend the life of your accounts - warming up the account, imitating the manner of betting of an ordinary priest. After cutting, there is only one way left - creating new accounts, about which we also gave our recommendations. We hope this material was helpful to you.